This last week, Honduras was hit by the effects of a tropical storm. The end of May/beginning of June mark the change in seasons from dry or summer to wet or winter. However, after five days of never stopping drizzle and rain. Marillyn and I were beginning to wonder if God recanted on the whole “flood the earth once” promise. 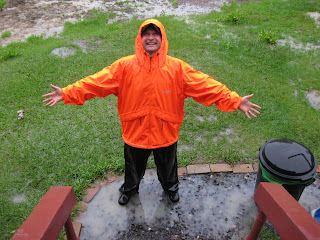 Not only were we hit with a lot of water, but the change in seasons also brought a new batch of colds and flu’s (Jon lost his voice for four days). Needless to say it was a challenging week. Not only did we cancel Thursday and Saturday’s activities, but Sunday afternoon service was also canceled. The help from Tegucigalpa was unable to come because several of the helpers lived in areas in the city that were threatened by flooding and needed to get home after their morning service.

Construction on our house was also slowed to a muddy pace as the men were limited in constructing the walls because the mortar for the blocks would not set in the wet. They improvised setting up a temporary roof with the used chicken house roofing. Everything is so wet that we decided the construction needed to take a week off to dry out. Praise the Lord, Monday was partly cloudy, meaning we actually saw the sun, and no rain! 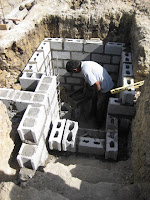 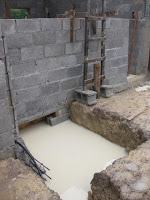 Mare's Root Cellar turned "Mud Tub"
It was frustrating to cancel a lot of activities because of weather and health, but such is life. I was greatly challenged by an entry in Oswald Chamber’s devotional talking about making the most of our time – even when we feel unproductive. Needless to say I was busted!

One very encouraging event that happened was Jon was able to briefly visit most of the families that attend on Sunday to let them know that the service was canceled. He got most of the family’s numbers to contact in case of canceled events. (During this time Jon learned of the tropical storm, there was even a message on Television from the President declaring several emergency/crisis areas in the country).

So, pray for us in this change of season and continued adjustment to life at Rancho Oasis. God is good and always on the throne, rain or shine. Amen?

1. Pray for Roy and Michael from eMi ministries. They will be joining us at the Ranch for four days starting this Saturday to survey the property.

3. Continue to pray for Wayne and Brooke during their trip in the States.

4. A young Honduran man Ramiro will be joining us this week to escape temptation in Tegus and build in him a good, missionary work ethic. Pray for good work and discipleship.

5. Pray for our health and wisdom how to work in the wet season. Most recently Jon caught some nasty bacteria and spent more of the night in the bathroom then his bed. (Jon had his class memorize Romans 8:28 this week – good timing right?)

6. Mare and the baby are doing well. Continue to pray for strength during the pregnancy!

7. Our female Dane, Daisy, was fixed this week. Please pray for her quick and speedy recovery. 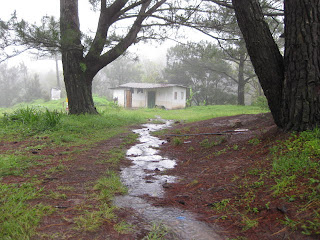