We look forward to reconnecting with our RO4Y family this August!

Not only will we be sharing about what God has done at the Ranch in 2016, we'll be traveling with a variety of artisan crafts from our trade school, as well as Hope Coffee from Honduras.


Fact #1:
To raise awareness of the ministry happening

God’s Spirit is changing the lives of children, teens
and their families in the rural mountains of southern Honduras.

Your friendship, partnership and prayers are critical for our success!
Will you join our support team?

[Paul & Barnabas] called the church together and reported everything God had done through them. Acts 14:27 (NLT)


Fact #2:
To increase our financial support so we can influence more lives

The Ranch has been blessed with consistent financial giving to cover all of our basic ministry needs. With more monthly support we can expand current projects that we have in the community to help with people's standard of living and mental/spiritual health, plus give us more in roads to communicate the Gospel.  The reality is that money is necessary to provide the services we offer to the youth of Ojojona and Tegucigalpa.

We've had approximately a year-and-a-half living on our new 17 acre property.
We will be collecting funds to improve the property and pay off our interest-free loan!
Major projects include new staff house, new fencing and finalizing several construction projects: the Beard's home/team meal hall, ministry house renovation, and the equestrian riding areas.
A large financial invest would be a major blessing.

Please inquire about other financial needs.

We trust that God will provide for the ministry's needs;
Is He calling you to be involved financially?

You Philippians were the only ones who gave me financial help when I first brought you the Good News. Philippians 4:15 (NLT)


Fact #3:
To call the body of Christ to come along side us
by organizing short-term missions teams

The majority of the Ranch’s construction projects are completed by groups and the money & labor they put into the buildings. Completed projects mean more opportunity to share the Gospel. We've also expanded outreach to the community via VBS, community/RO4Y family construction projects, health seminars, a youth purity conference, rummage sales and special dinners. Teams have also joined us by participating in the regular scheduled events of the ministry week, like leading Bible studies and teaching new crafts.

So much construction as been accomplished in the ministry season of 2016!
Yet, so much is left to improve on this 17 acre property.

We also recognize the dynamic spiritual change that can happen during a missions trip. Marillyn and I are serving as full-time missionaries because of our short-term experiences.

It’s a kingdom building investment at the Ranch and in your life.
Is God calling you to invest a week or more of your life for His kingdom in Honduras this year?

The Holy Spirit said, “Dedicate Barnabas and Saul for the special work to which I have called them.” Acts 13:2 (NLT)

In the field, Rancho Oasis is two full-time North American staff, one full-time Honduran staff, several part-time Honduran staff and a family of six that includes one bi-lingual adult, a deaf woman who is proficient in Spanish communication and five children under the age of ten. We are stretched to the max and amazed at all that God is doing. We’ve seen God move even more when another adult or young person joins us in ministry. (We are praying specifically for someone to assist Jon with the construction projects and maintenance of the property.)

Reality is we can’t accomplish what God has called us to do on our own.
God is preparing each one of us in the body of Christ to serve and advance His kingdom.
Will you test God’s faithfulness to you at Rancho Oasis?

God has given each of you a gift from his great variety of spiritual gifts. Use them well to serve one another. 1 Peter 4:10 (NLT)

Fact #5:
For some R & R: "Refreshment and Rejuvenation"

7 months of ministry with all of its ups and downs can be invigorating to the soul, but draining on the body. The Beards are looking forward to reconnecting with friends and family, as well as enjoying time as a couple! (This year Jon and Marillyn are having a "baby-moon" before the birth of their 5th child. Marillyn's parents will be watching the kids in Honduras in their absence!)

That is why we never give up. Though our bodies are dying,
our spirits are being renewed every day. 2 Corinthians 4:16 (NLT)

We look forward to seeing you this August!!
Keep these goals in your prayers!!!
Posted by The Beards: at 6:48 PM 1 comments

PRAY for the Beard family with their unexpected/unplanned blessing. The kids are done with school for the season and Mom & dad are loving it/going crazy!

PRAY for Melody as she transitions into life at RO4Y.
She has spent the last 3+ years teaching at an English bi-lingual school in the northern part of Honduras. She has years of equestrian experience and will be a valuable addition to the Ranch combining horse therapy, evangelism and discipleship. 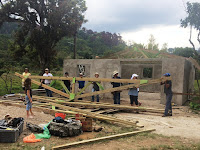 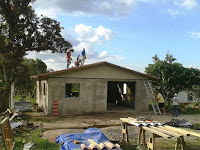 PRAISE: We had a short, but good week with our first time visitors from the north-west. PRAISE that Wayne Goranson, Marillyn's father, was available and ran the construction crew while Jon focused on the missionary mechanic and our car repair.
View more of the team's trip in the their album on our Facebook page.

PRAY for our next team of twelve arriving on July 17th from suburban San Diego. The team will finish the work on the workshop/warehouse, be involved with the Ranch's regular weekly outreach, as well as a special staff Bible study - one for the ladies and one for the guys!

PRAISE the Lord for Kip and his wife Melisa!
PRAISE the Lord that the transmission was paid for & shipped to Honduras and arrived BEFORE Kip did! Quite a miracle! PRAY for Ivan as he made a commitment to Christ during the week.

PRAY for the Rancho Oasis staff:
Lucinda has gone on furlough for the months of July & August.
Melody will depart in early August for a few months to raise a support team.
Ilsy has taken a month off from Ranch responsibilities to rest.
Lesly, Dunia and Keyla are working a bit more hours (that they wanted & needed) to make up for Ilsy's absence.
Oscar has weekends off now that Machi is assisting him.
And Jon and Marillyn have a short-furlough planned for August
Heads-up Freedom Fellowship, Wisconsin
Calvary Chapel Morgantown
and Calvary Community in Cedar Rapids, Iowa!!! 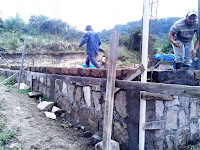 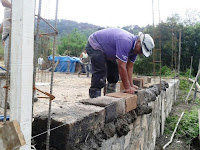 The guys add the first row of adobe bricks to the rock & mortar foundation!

PRAISE for God's miraculous provision!
PRAY we can get a roof on BEFORE the rains really hit in October!
Learn more on you can be involved with CDA's progress.


PRAY that God would increase awareness of the trade school and continue to provide for the students.

PRAISE for the friendships & ministry that we have @ Union.

PRAY for these young men to grow in Christ. PRAISE: We ended the season in 7th place of 8 teams, but were awarded the "Most Disciplined Team" award (aka - least amount of fouls!)

PRAY for us as we endure a season of things breaking and getting fixed!
The Durango has been in the shop a few more times, the generator was surging but has been fixed (but not tested on our homes), our water pump has broke twice (praise we had just enough gravity to get water in the house), our tankless water heater has been out for several weeks (praise the company is sending us replacement parts for FREE!) and our State-side mini-van "died" and can only be scrapped (it was given to us last year and the repairs are more than it's value.)

PRAY for the van! We received a large donation that we want to use to import the van. (Many Honduran friends and missionaries said that the tax-free process was a long-shot.) However, the Honduran government agency LOST the car's documents; it is as if the van never came into Honduras! PRAY our lawyer and his team find a way to get us some Honduran plates! We could really use this vehicle!

PRAISE God for His provision to allow us to take a week vacation with Marillyn's parents, Wayne & Brooke Goranson. They now live in Costa Rica and they hosted us for the week. God is good!

Love you all, Support Team!

Thanks for your constant prayer, friendship & gifts!
Posted by The Beards: at 6:03 PM 0 comments