Therefore if any man be in Christ, he is a new creature:
old things are passed away; behold, all things are become new.
2 Corinthians 5:17 (King James Version)
Standing before the entrance of the Ranch, my hands trembled with excitement and my eye swelled with tears. It was finally here. Our first official horse rescue! 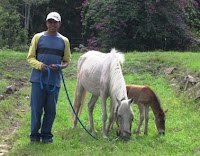 The mare's eyes grew to seemingly twice the size when she walked onto the lush pasture of Rancho Oasis. After we prayed and brought her onto the property, she immediately started eating. Oscar, the Ranch's stable hand, and I teasingly said that she was now in paradise "the land of oats and molasses".
Oscar and I stood before the Lord on a beautiful Wednesday morning dedicating the two newest members of Rancho Oasis: a spotted grey, twelve-year old mare and her week old filly. Over five years of praying and dreaming had come to this moment. It was more tangible than I ever would have imagined. Rancho Oasis, the original vision, had begun!

Horses, children and Jesus has been our hope and prayer since the inception of Rancho Oasis. However, we intentionally didn't rush into our dream. We wanted God to build this barn!
Since moving to Honduras we've looked at several horses and even had a young wild horse (remember Gozo) on the property for a few months. But nothing clicked, it wasn't the right time.
Then the last week of April, while in Ojojona, I ran into Gerardo, a pastor friend of mine. He told me his brother, Jose, was in an emergency situation with a new filly born the day before. The previous year, while in an unprotected field, a foal from the same mare was attacked and killed by coyotes. Jose did not want to see the same tragedy happen twice. He needed to move the baby and mare.
The next day, Marillyn, the girls, Tobi and I met with Jose and his wife, Dora. We also met the mare and her baby. The mare was very sickly, extremely malnourished, but thankfully still protective of her filly. (A good sign for a mom fighting for her own life.) It is common here in Honduras, the second poorest nation in the western hemisphere next to Haiti, that horse owners only feed their horses with what they can find in the fields. In Ojojona's hot and dry summer time, it is slim pickins.
We knew that without our help the mare might not make it to the coming Spring and as a result her baby would probably also die, let alone be attacked by predators. This is what we had been waiting for - a true rescue! In fact, the miracle goes beyond even the conversation with Gerardo because Marillyn and I had been praying for several months specifically for a mare and a filly. We had even been preparing the horses stable and securing feed supply weeks before this event. God's hand (and timing) was so clear.

After talking with Jose and Dora, we agreed to take on the mare and filly for a three month trial period. The mare's need was immediate, but we still agreed on a purchase price. (The exact amount of a donation that was given specifically for a horse!) Our one stipulation before purchasing the pair was to get blood work done on the mare to confirm the absence of a common blood disease in horses in Central America called animea. We are preparing to get the test done.


One of the reason's that Dora has hesitated to sell was because the mare was a gift to her from her father and she wanted her grandson to learn how to ride. However, we shared our vision to work with kids and horses and she was excited to have her son get free lessons from a professional rider (Marillyn). If the blood test confirms the mare does not have the disease, we have every intent to purchase them. Pray that God will secure this animal and her baby for the ministry.
So, the Ranch has started a new chapter with our first horse rescue. 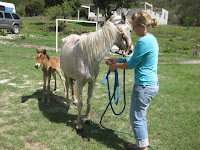 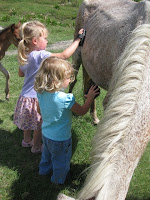 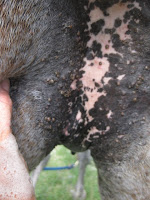 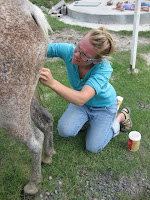 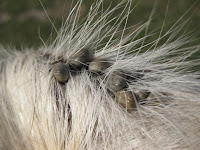 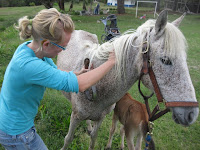 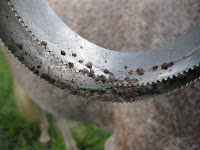 One of the practices that we liked from Crystal Peaks Youth Ranch was the renaming of their rescued horses. Something that not only gave the horse a fresh start, but told their story! 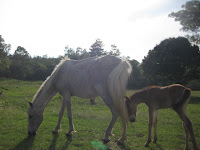 Therefore, we've decided to name the mare, Zoeva: pronounced "so-a-va". While talking to her owner Jose, we discovered that the mare was called "La Vieja" meaning "the old one" in Spanish. As we tossed around some ideas with supporters, 1 Corinthians 5:17 came burning into my mind. This ignited the creative juices and I remembered that the greek word "zoe" ment life and "nueva" is the Spanish word for new. So we put 'em together and got Zoeva. What a perfect picture of salvation!
Starved spiritually and vulnerable to the attack of the enemy, our rescuer, Jesus Christ not only gives us new life, but spiritual vitality and protection. What an awesome story to share with the families that come to Rancho Oasis...

Everyday Mare, Oscar and I work to bring Zoeva back to health. But we can see she is very happy here, and her gentle spirit is a comfort to us. Even more so is the hope of the young filly and her prancing around the property. She has even begun to get nose to nose and play with our Great Dane, Daisy. It is quite the site!
Please pray for wisdom for us as we help restore Zoeva and work with the filly.
Pray that God would make clear how to involve the kids in the community with the animals.

Pray that we would balance the new responsibilities of the horses and all the other animals and activities at the Ranch.
Praise the Lord for His timing and provision.

Pray that Jose and Dora would sell the horse before the 3 month trial period.
Thanks for rejoicing with us!!!

That is so very cool. PRAISE THE LORD!!! It's awsome to see things are coming together. We're praying for you all always.

This is so awesome! I remember praying so many times with you guys about a horse, so it's really awesome to see God's answer to prayer. I love the name, too!

Thanks Frank and Josy! We are very excited too. The gals are doing great and mama is fattening up :o)