The Gideon Effect: Bienvenidos a Honduras!

Most of you are familiar with the story of Gideon and his fleeces. That is not what I want to talk about. Remember how Gideon was called to fight the bad guys and he had so many thousands of soldiers but God whittled down the number to double digits. (You Bible scholars out there can help me remember the exact amounts). The principle that God was trying to teach Gideon was to rely upon Him completely, put faith in nothing else but God Himself.

Our journey to Honduras achieved the Gideon factor over and over again! God is good.

There and (not going) back again(to Costa Rica... anytime soon):

A Honduras Adventure in photos

Our former intersection in San Ramon and our current entrance to the Rancho Oasis property! 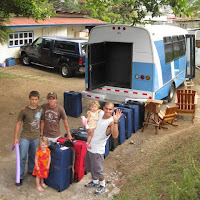 Juan Manual, English Teacher and friend, rallied some youth from his church to help load for our journey. 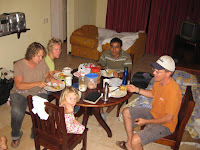 Breakfast at 4 AM in Liberia, Costa Rica. Our friend and translator, Miguel Juarez.

Getting our passports stamped at the Nicaraguan border. 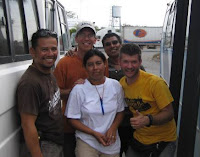 Our friend Diego who serves with Youth With a Mission in Costa Rica helped us through the Nicaraguan border with a contact of his Angelica who is actually deaf. God showed his power by getting us through in a little over an hour! 7 passports, 2 vehicles and 2 dogs! That is a lot of stamps, receipts and paperwork. 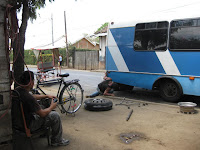 The bus got a flat tire, but no problem God knew. We were 15 minutes from a schedule stop in Nicaragua (rather than in the middle of no-where-land). We drove around the black and had the tire changed! We also bought the lug nut wrench off of the guys. (This was totally the Lord because I’ve had the tires changes twice since then and both places didn’t have the right tools to change ‘em).

The two latest edition to the Rancho Oasis family: Daisy (the blue harlequin) and Marmaduke (the black). Brother and sister Great Dane and Mastiff mix. 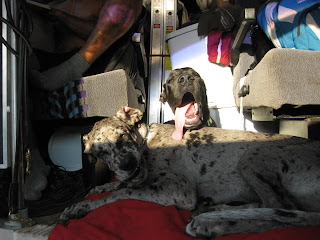 Naomi and Marillyn in Nicaragua. Brooke and Tabitha enjoying a mandarin orange. 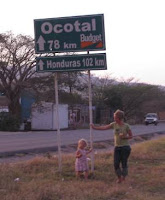 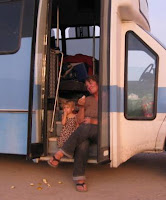 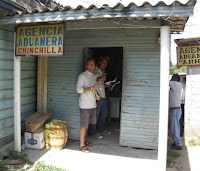 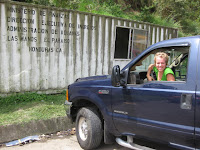 Mare at the Las Manos border crossing in Honduras. 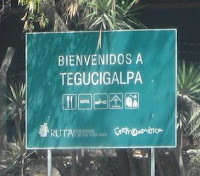 This sign marks the gravel road from Ojojona to the road that leads to RO4Y! 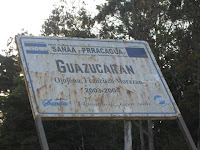 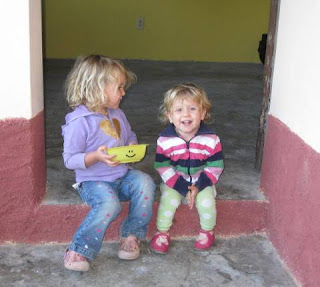 Naomi and Tabi settling in to the new house. Praise the Lord they are amazing travelers! 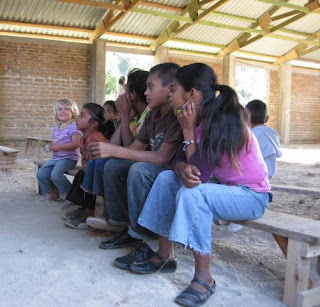 Naomi enjoying Sunday afternoon worship with the local kids. (This was her first experience in Ojojona because only Marillyn, Tabi and myself visited last December).

The first group of passengers in the Rancho Bus! 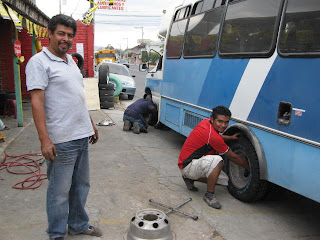 Oscar and his son Michael. Oscar has become a go-to-guy for us in Honduras. He is Patty Mulla’s brother and he will be working with us on constructing the buildings for us on the property. We were praying that God would provide and local, Christian Honduran to help. BINGO! In the photo, Oscar and Michael are helping install the new tires Oscar located for the bus. (Lug nut wrench look familiar?) 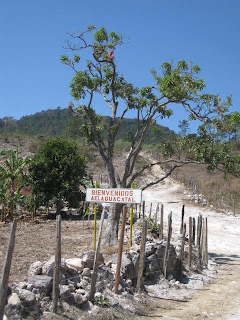 While searching out Ojojona for local food sources, a neighbor youth lead me to a young man named Edgar. Edgar’s family has dairy products and is a great source of cheese and milk for us. While visiting Edgar revealed his Christian faith with me and his passion for teenagers. He invited me to participate in an evangelistic project in the next town “down the road”. The next photos are from that adventure. 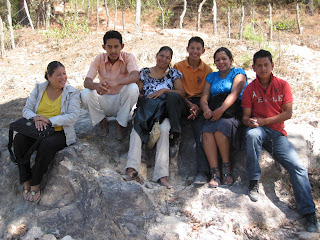 Edgar in the Salmon shirt, Antonio in the red accompanied by several friends. Antonio is a 14 year-old young man who lives just up the street from us. He has accompanied Jon on several errands in the bus and helped out with different projects on the property. Pray for his walk with Jesus!

Edgar shares his testimony with 1st through 7th graders! 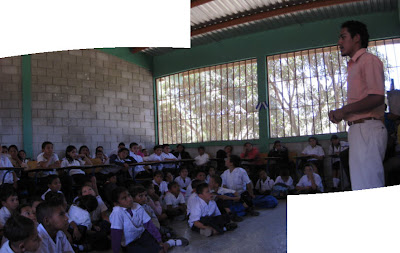 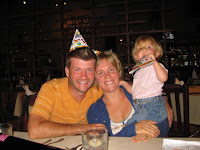 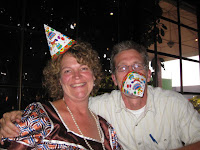 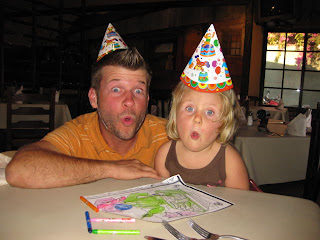 IMPORTING THE BUS: We got the bus from Costa Rica to Honduras in one piece. Now we have 90 days to get it switched over to Honduras plates and registration. We read that once every five years a car can be imported tax free. Pray for wisdom in accomplishing this task.

BUILDING RO4Y: Our missionary friends Jason and Patty Mulla have just completed their home and their contractors are available to build. (It just so happens Patty’s brothers, Oscar and Luis, are the builders. Pray that God will direct these men as we began work on a shower house and our home!

FIRST GROUP: Our first group arrives at RO4Y in April. They are coming from Bangor, Maine and have ministered with the Mullas in the past. (I believe they constructed the multi-purpose building that exists on the property). Their plan is to install a new septic tank and put a concrete floor in the multi-purpose building. Pray that we serve in unity and have wisdom ministering alongside our first group. Pray specifically for Brooke, as she heads up the interaction with the group. Those of you interested in helping to purchase the septic tank the cost will run around $500).

LIFE ON THE RANCH: It is hard living here. Not because we can’t, but because we’ve been used to so many comforts. As life goes, some days are better than others, but we know that God has called us to be here; therein lies our hope. Pray for strength: physically, mentally and emotionally.

TOUCHING LIVES: Pray for our personal devotions, family devotions and extended family devotions. Jesus needs to be the foundation of everyday and of our RO4Y. Pray that God continues to open doors to minister and meet our neighbors and the people of Ojojona. We’ve taken a rest from actively serving on Sunday afternoons with the group for Calvary Chapel Tegucigalpa arrives. However, our home is getting established so pray for wisdom as we transition in to ministering on Sundays with the CCT group and beyond.